Fish ‘n’ chips, with a side of microplastics

Plastic debris has become ubiquitous in the marine environment. There is increasing evidence of plastics turning up in seafood.

Recently, New Zealand scientists, alongside collaborators from Tahiti and the USA, have investigated the ingestion of plastics by commercial fish species that form an important part of the Pacific diet. Hannah Davidson reflects on her first-hand experience and current science around the grim state of plastic in pacific oceans.

Once hailed as one of the greatest inventions of the 20th century, plastic has crept into every corner of the world. We have all seen it – a sodden plastic bag on the beach, the photos of helpless marine life entangled in fishing nets and milk bottle rings. And that’s just the stuff we can see.

When plastics enter the ocean, waves and sunlight will break it up into tiny bits, called microplastics. A 2016 report by the World Economic Forum predicted that, at the current rate, there will be more plastic in our oceans than fish by 2050 (by weight). At the time of writing, it was estimated that over 150 million tonnes of plastics reside in the ocean, and with no action this number will only grow.

For me, the magnitude of plastic pollution was soberly illustrated whilst snorkelling near one of the world’s most pristine dive sites, off the eastern (Sabah) coastline of Borneo. What at first appeared to be some exotic sea creature, glimmering red in the distance, instead came into focus as a noodle packet.

On the way back to Semporna, the boat had to stop three times so we could remove plastic debris from the motor, and as far as the eye could see, plastic bottles bobbed around hopelessly on the sea’s surface. It led me to entertain the idea that perhaps the salinity of the ocean really can be attributed to the tears of those living in its depths.

For the people of Semporna, the fish caught from these infested waters are an invaluable food source. This is also true for our neighbours in the South Pacific, and little is known about the contamination of commercial marine species by plastic, and the effect this might have on communities that rely upon them.

In a recent study, published in the Marine Pollution Bulletin, a group of New Zealand and Tahitian scientists (with a collaborator from the 5 Gyres institute in Los Angeles) performed a broad-scale assessment of plastic ingestion by fish that make up part of the South Pacific diet.

In the belly of the bass – counting microplastics

Fish were from different habitats and trophic levels, caught by local fishermen and obtained as random samples from local markets or the fishermen themselves. Identification of the fish species was confirmed using Fishbase (a global information system, covering more than 33,000 fish species) and the New Zealand Ministry of Fisheries identification keys.

The entire gastrointestinal (GI) tract of the fish was then examined; first by the naked eye to identify larger plastic particles, then chemically digested using hydrogen peroxide and heat. Chemical digestion breaks down the organic matter in the tract, and leaves only the material resistant to this process, like plastics. If an entire prey item was discovered that had its own GI tract intact, this was removed and used for an analysis on secondary ingestion – the ingestion of plastics from eating contaminated prey.

Once digested, the material was filtered using 63 μm, 260 μm, 530 μm and 1mm mesh sizes, and the captured material was examined using a microscope. The microplastic particles identified were characterised using an analytical technique called Fourier-transform infrared (FTIR) spectroscopy. Essentially, this examines how infrared light interacts with the atoms in the polymer that makes up the plastic material. Different polymers have different chemical compositions and will vibrate in different ways.

The Fourier-transform part refers to the mathematical way that the data from these vibrations is transformed into a graph, which scientists can read and compare with well-established reference materials. The most common plastics identified were polyester (28%) and polyethylene (26%), which are used in diverse applications such as packaging, textiles and construction.

Plastic debris was found in 97% of the examined fish species, and almost a quarter of individual fish across the four locations in the South Pacific. Of the plastic debris extracted from the samples, 95% were microplastics (smaller than 5 mm). The authors found the first evidence of trophic transfer (where the plastics ingested by a prey fish are transferred up the food chain to the predator) in wild fish. They even discovered one fish, a Pacific chub in Rapa Nui, who had ingested 104 pieces of plastic - a world record in plastic load in fish (funnily enough, no-one is celebrating).

When they looked at the differences in ingestion rates across the four different locations sampled, they found a much higher ingestion rate of 49.2% for Rapa Nui fish, compared to fish from the other locations (NZ, Tahiti and Samoa). Usually, more populated areas are more highly associated with marine plastic pollution, but the exception to this is coastal areas within the ocean’s “garbage patches”.

Rapa Nui is one such environment, an island situated in an oceanic accumulation zone of the South Pacific subtropical gyre, also called the “South Pacific garbage patch”. This is yet a separate garbage patch to the more well-known Rubbish Island/Great Pacific garbage patch. These are zones where, because of ocean circulation currents, plastic can accumulate in much higher concentrations than other areas of the ocean. This results in higher ingestion rates of plastic, further exacerbated by the fact that there is low food availability in subtropical gyres (meaning the fish are less likely to find actual food).

The authors also discuss the ecological risks posed to the fish themselves, and other marine creatures that prey upon them. Besides presenting a physical threat, marine plastics can also carry toxins on their surfaces, such as persistent organic pollutants (POPs).

POPs are controlled internationally under the Stockholm Convention on Persistent Organic Pollutants. This was ratified by New Zealand in 2004, and at the EPA we have representatives involved in ongoing consultation with the parties of the Convention. Check out the other multilateral environmental agreements that New Zealand is party to on our website.

This allows environmental contaminants transferred from the water to the plastics to move into the animal’s tissue. In light of the repercussions this could have on marine animal health, and food security for those communities who rely upon healthy seas, the authors recommend a multi-disciplinary approach to further understand the impact of this omnipresent issue, including adjustment of national and international legislation around waste management and disposal, and education and awareness. 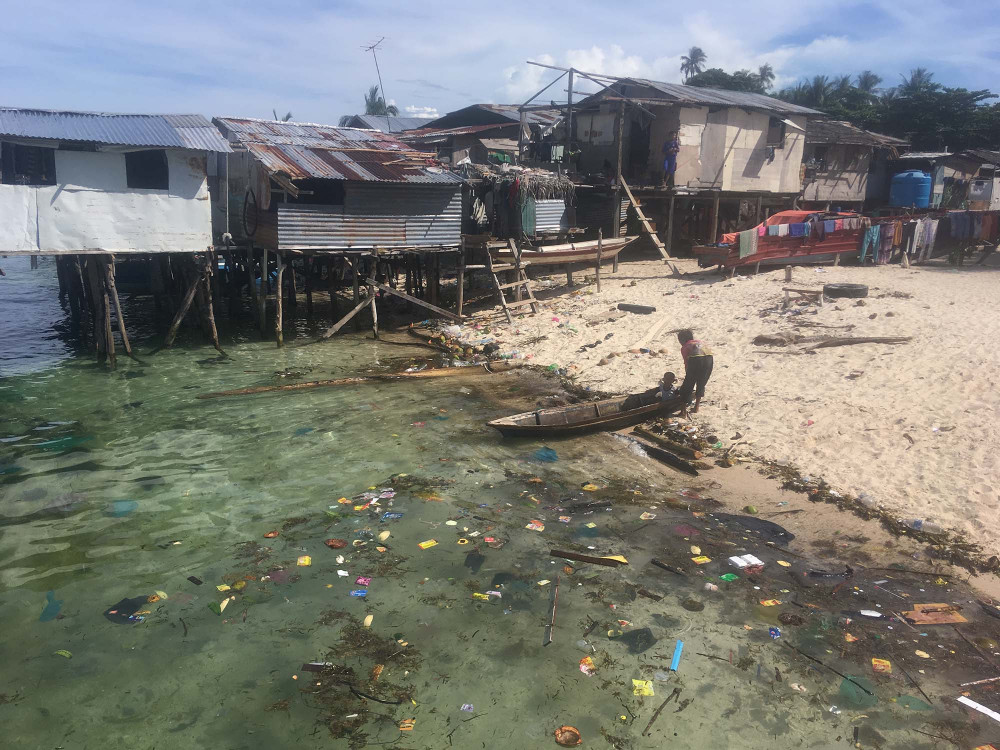 These are sage recommendations, and whilst further research is indeed valuable, there is enough evidence to warrant immediate action. The issue is complex and systemic, and the worst effects appear to be washing up on the shores of nations that are less well-resourced to deal with the issue - from small islands like Rapa Nui to the bays of Borneo. As such, there could be opportunity for a worldwide phase-out of one of the main culprits, single-use plastic packaging. Perhaps this could take place under the United Nations framework, not dissimilar to previous agreements such as the Paris agreement for climate change mitigation and adaptation and the Stockholm convention on POPs.

Recently, a decision under the Basel Convention on the Control of Transboundary Movements of Hazardous Waste and their Disposal was made to better regulate global trade in plastic waste – a move that will prevent problematic unrecyclable plastic waste from being shipped off to countries like China and Malaysia.

Some countries are introducing their own legislation. France ruled in 2016 to phase-out single-use plastic plates, cups and utensils over four years, and the European Union has recently decided to bring in similar legislation from 2021.

Banning single-use plastic bags in New Zealand this year was a good start, but there is appetite for further change, with many businesses already moving towards more sustainable alternatives. The Office of the Prime Minister’s Chief Science Advisor (OPMCSA) is rethinking plastics in New Zealand, working with a multidisciplinary panel of experts to assess plastic movement and life-cycle in NZ and innovative solutions and opportunities to change our relationship with plastics. Watch this space!

As a country, and as individuals with the means to do so, we can continually strive towards phasing out single-use plastics and excessive packaging in our day-to-day lives. We owe it to the turtles, we owe it to our neighbours and we owe it to our oceans.